Chocolate has been Patrice Chapon’s element since 1986, although his first forays into its magical kingdom began way back in the secrecy of his bedroom while still a young boy, and then down in his father’s wine cellars…. He simply lives and breathes the stuff. And with every day that’s passed since then, this man with the penetrating gaze, crystal-clear vision and imaginative talent for concocting goodness and beauty has continued to pay homage to his raw material of choice.
Patrice Chapon’s love of conjuring up a world of sheer deliciousness has taken him to giddying heights – even at one point making ice creams and sorbets for the Queen in Buckingham Palace. And you soon understand why. His ice cream is voluptuous – a silky texture perfumed with spices from opulent vanilla to cinnamon, while his airy sorbets take seasonal fruits and transform them into delicacies alive with subtlety and finesse. There’s nothing he can’t turn his hand to – every taste bewitches him – and he has just one ultimate goal in mind: pure pleasure.
His every endeavour is guided by a single watchword: childhood. And so it’s hardly surprising that his company insignia captures a certain mischievous innocence, with its three children proudly sporting boxes of Chapon chocolate.
Patrice continues to explore the realms of childhood fantasy in search of all things delicious, keeping his inner child alive. And there’s plenty to choose from – his journeys take him to all four corners of the globe, from the lush forests of Brazil to the MIllot or Sambirano plantations in Madagascar, where cocoa trees vie for glory with jasmine and tuberose.
Since 2012, Patrice Chapon has achieved every chocolatier’s dream: creating chocolate in his own Chocolate Factory. After years spent searching for machines capable of processing cocoa and two years of careful restoration, the stage was set for transforming cocoa beans into highest-quality chocolate. The tools were historic but the production was modern, and the result was total control of the manufacturing process. Incidentally, Patrice is the only full-time chocolatier in the whole of France to roast his own cocoa beans and produce chocolate from them: a process known as ‘bean to bar”.
Patrice clearly masters every stage of the creation of his chocolates, from the cocoa bean to the bonbon, culminating in a product that’s quite unlike anything else you’ve ever tasted 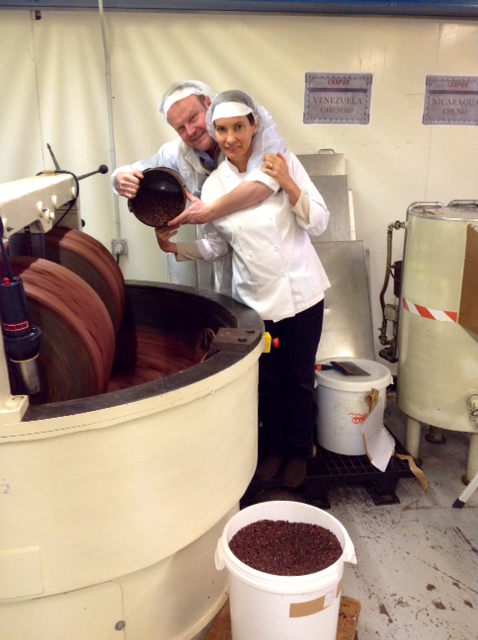 How the partnership began

Patrice Chapon met Maria Fernanda in Peru two years ago at a foodie festival. They got to know each other during a visit to the local cocoa plantations. Patrice then visited Maria in Venezuela in January 2015. Together they visited the plantations, looked at various cocoa bean fermentation and drying processes, met producers and tasted cocoas from several of the country’s region.
What few people know is that Venezuela is the only cocoa-producing country which has sold its produce by regions for 400 years (much like French wines from Burgundy or Bordeaux), and that their quality has made them the most famous and expensive in the world.
Maria Fernanda runs several companies in Venezuela and is herself both a chef and a chocolatier, with a small-scale production lab that handles just 30kg of local-origin cocoa. She works directly with Venezuelan farmers and buys their cocoa at source. Those farmers who are interested can bring their own beans to make chocolate in her lab, and then take away the bars to share with their family and colleagues –which helps them assess the strengths and weaknesses of their cocoa and work on improving their product.
Maria Fernanda and Patrice Chapon then made their first chocolate together, using Local Origin Cocoa but bearing the Patrice Chapon name. It was all sold in Venezuela.
Their partnership currently focuses on three chocolates from different regions of Venezuela:
-          TRINIDAD: an intense flavour, notes of cooked and dry fruits, tart and acidulous.
-          CHUAO: a very small annual production: aromas of red fruits, lively and slightly acidic.
-          RIO CARIBE: a balanced, traditional, aroma with surprising notes of vanilla pods although there’s not an ounce of vanilla in the recipe!
Since then, Patrice Chapon has bought several cocoas from Venezuela and has obtained around 200 kg of a cocoa mix from the Merida region, known as MARA, with a dominant genetic strain of GUASARE (rarely cultivated, usually found wild) and PORCELANA (one of the subtlest cocoas in the world). These are the ‘hybrid’ cocoas of Criollo.
They combined their know-how once again at the Salon du Chocolat 2015, helped by Chloé Doutre Roussel (an international chocolate expert) to co-create another new product – the Cocoa de Origen. Proceeds from sales of the chocolate bar were used to buy new fermentation equipment.